Thank you so much for your words of encourage about the loud dude above me (we’ve affectionately nicknamed him Stompy) and for your congratulations on my new job! I am wrapping up my first week and am looking forward to next week!

This post is a little late but I have been so busy with my new job that I haven’t had time to sit down and write an update about my 8th week of triathlon training. I think things are going pretty well and I also had my first experience with an open water swim! 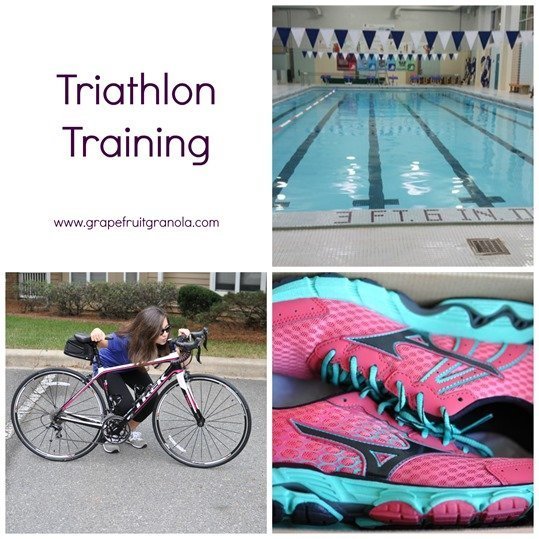 I started out the week on a great note because it was my first time back in the pool since I got my cast off! 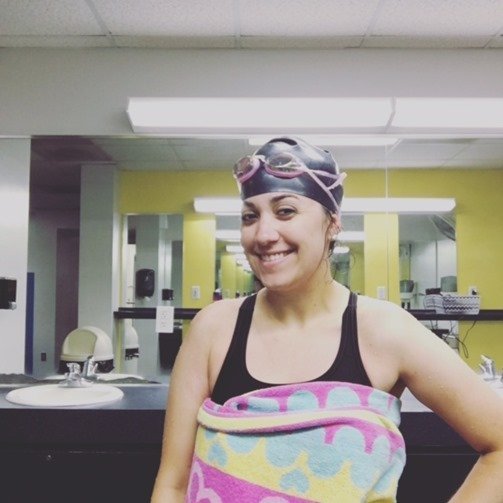 I was just kind of taking things easy to see how it felt and I swam a nice and slow 600m. The swim team was practicing in the other lanes… I felt old

Something sad about this swim was that I knew it would be the last time I ever swam in the local YMCA by my old job. Guys, that pool has meant so much to me over the past 1.5 years with rehab. I definitely had a moment there that day <3

Wednesdays have become the days I love to hate because they are my brick workout days. I rode my bike for 50 minutes and then ran outside for 25 minutes. I ran a 13:13 min mile which is my fastest mile so far in training. 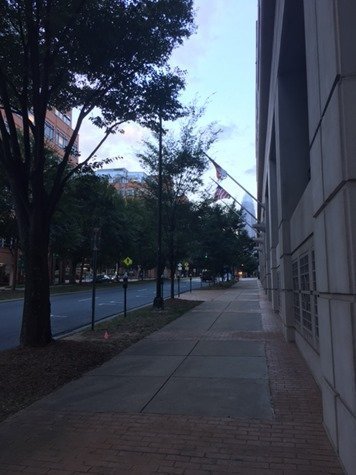 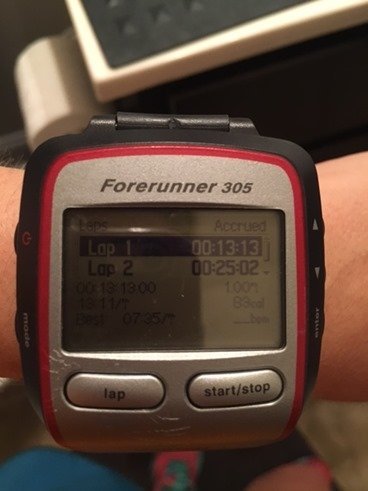 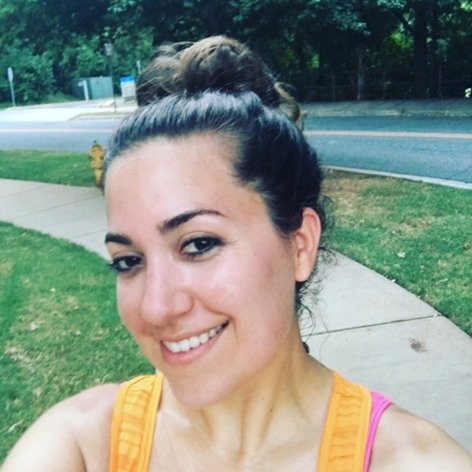 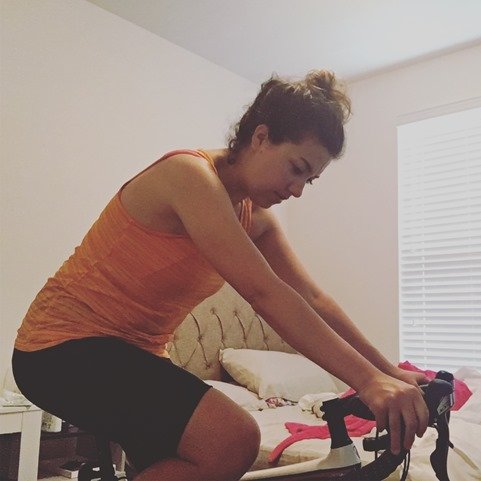 So I’m a little confused about keeping my runs at a low/moderate pace but then racing full speed on race day? Like… how do I know how fast I can really run if I tried?

But I’m just going to go with it.

I had really been looking forward to trying an open water swim, and the US National Whitewater Center’s Thursday night *free* open water swim has been on my calendar all summer. 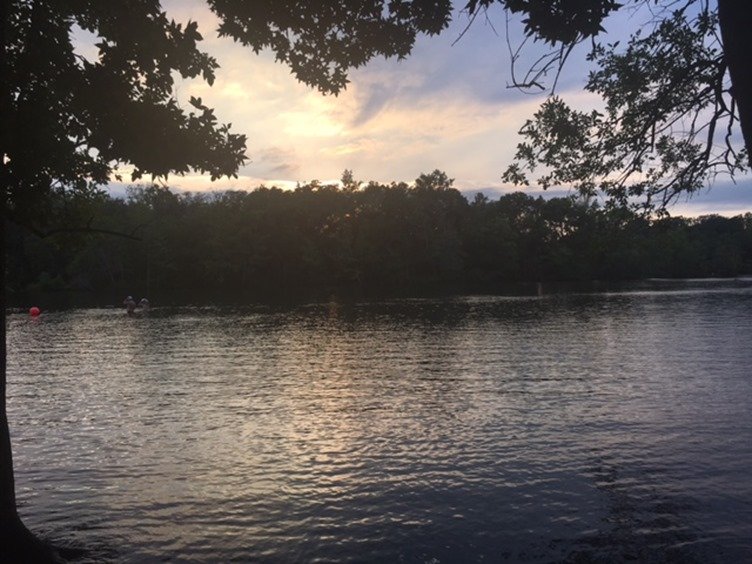 I was so intimidated to join in on this swim. I really wanted my roommate to come with me because I’m a big baby, but he was busy that night. So I made the trek all the way out to the river solo. 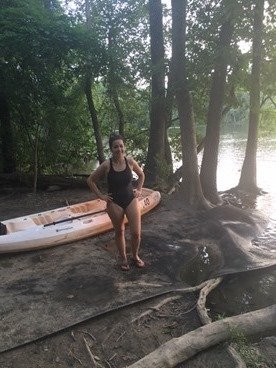 Once I got to the swim site, I realized how laid back everything was. There was a WWC employee who had me sign a waiver and then I hopped in the water to join a group of about 6 other people. There were buoys were about 40m apart, and I think I made about 5 loops around them. 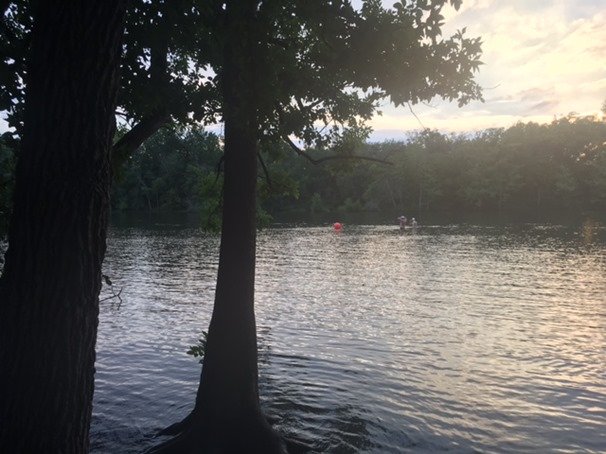 There were several things that really surprised me about the open water swim:

No visibility whatsoever: so I was expecting to not have any black line on the bottom of the river to follow, but I was not expecting at all that I basically wouldn’t be able to see anything. I had no idea where I was swimming…. sometimes I would look up and was nowhere near the course of following the buoys.

The current: FUNNY STORY: When I swim out to the buoys and made my first “length”, I thought I was totally kicking butt. But then I looped around the buoy to come back and felt like I was hardly moving. I was swimming HARD and think I moved about 3 feet. That’s when I realized I had been swimming with the current at first and was now swimming against it. Dealing with the current was hard and I’m glad I will be racing in a lake instead!

Super dirty: I went to take a shower and there was dirt everywhere. Dirt in places where there should never be dirt. And I know it’s a river but it seriously grossed me out. Reason #382347 why I think I might be crazy for attempting this tri.

Overall it was a great experience. I had originally planned to do every Thursday there but after doing it once, I realized that I am sacrificing a night where I could really be working on building endurance because of my wrist stuff. So I might head out there one more time but will mostly stick to the pool.

Both of these ended up being rest days accidentally. I had tickets to fan fest on Friday, it was my last day of work and I only got 1.5 hours of sleep the night before. Noooo way I was going to make it through any sort of workout. And then we went to my mom’s bright and early Saturday morning. Hate that I missed these but oh well.

I rode 70 minutes on my trainer this day. This was my longest ride so far in training! I like riding on the trainer at home because I can play around on my phone, read and blast music. But honestly, as much as I like riding, 70 minutes was a little long… not sure how I’m going to handle 90 in a few weeks. 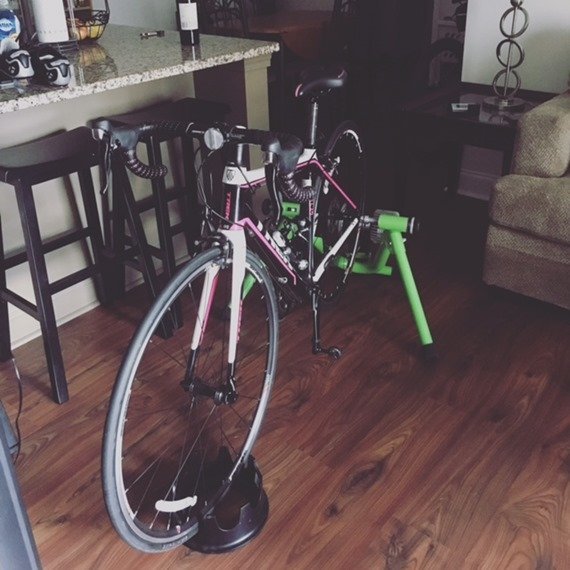 – I am kind of struggling with fueling. I’ve decided that I don’t like gels and eating real food I don’t think will be a good option for me. I’m going to try out some chews this week. What do you use for fuel?

– I seriously spent like 30 minutes last night looking at bullet planners. WHAT ARE THESE? It looks like so much work to make one but then also is a great excuse for using colored pens

Do you use one? I’m still hanging on to the good ole’ Erin Condren planner!

– OLYMPICS SPOILER: I’m really heart broken that Ryan Lochte didn’t medal last night. He has had a soft spot for me ever since he moved to Charlotte. I feel bad for him that his career has been overshadowed by Michael Phelps because he really is a talented swimmer.

– What are you up to this weekend? I’m going to a brewery tonight and then I’m working this weekend. I was already on the weekend schedule at my old job and agreed to still cover. Definitely looking forward to having my weekends back with my new job!

Have a great day, guys!