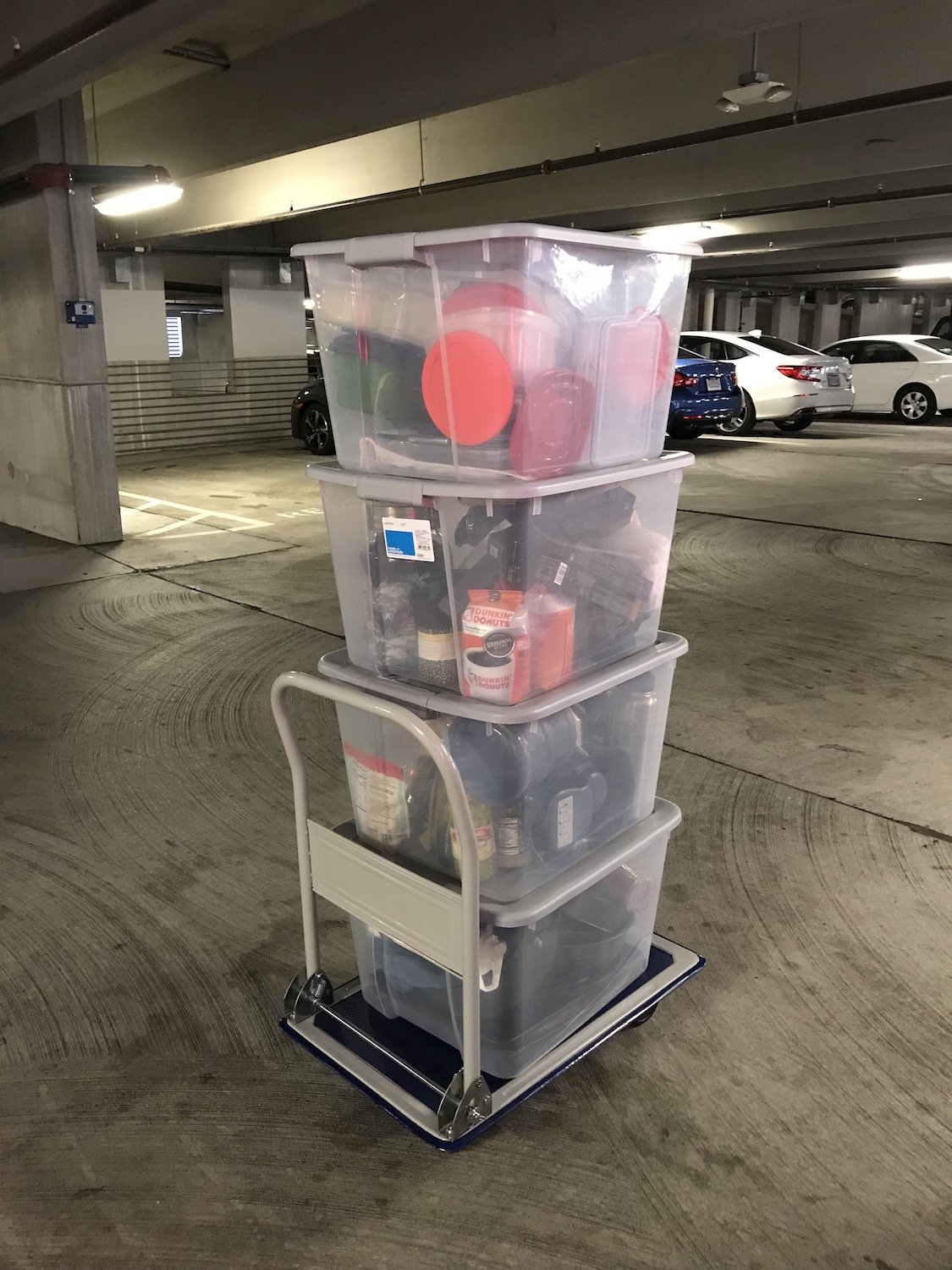 Here’s a recap of Week 7 of our house renovation plans. The biggest news this week is that we have officially moved into our apartment! So glad to have that over with!

I have a system that I’ve always used for moving that helps me feel a lot more at home on the day or two after the move. I like to move over my kitchen essentials, bathroom stuff, and a few other necessities (like scissors) prior to the move so that I still feel like I can function when my place is covered in boxes.

I used plastic Steralite containers to move over kitchen stuff before the actual move. They protect kitchen / glass items  a lot more than boxes and stack easily when they’re empty. Once I was done using them for moving, I put sheets and towels in them to stick in storage!

Side note: I got this rolling cart on Amazon for $37 and it is basically the best moving investment I ever made. So helpful in moving items from our parking deck into our apartment.

We went into the week planning to move on Saturday by renting our own moving truck and hiring movers to load and unload. This is usually a lot cheaper than hiring a company to do a full-service move.

But going into the week, I already felt really exhausted from everything going on between juggling 2 houses, 1 apartment and also seeing clients. B is working 12 hour days and is super stressed at work as well. The idea of parking and dealing with a moving truck in our apartment’s parking deck (which is in a small commercial parking lot with several restaurants) was stressing me out. So we decided to just hire movers to do the whole thing. Unfortunately the movers weren’t available on Saturday morning and we ended up having to move on Friday instead. Having one less day to pack felt a little chaotic but we made it work.

We moved on Friday and the entire thing took 6 hours with 4 movers and 2 moving trucks. We split our stuff up and put >50% of it in storage for the next year and kept our bedroom, office and living room furniture for the apartment. The moving company suggested just using 2 different trucks to make things go faster, and I’m so glad we decided to do this.

The move took so long because we had to deal with taking the service elevator up to our apartment floor, and then walking alllll the way to our apartment from the elevator. The movers had a system where 2 of them unloaded the truck on the ground level and sent furniture up in the elevator, and 2 of them were at the top of the elevator carrying furniture to the apartment. We decided to have them leave the boxes at the top of the elevator and B and I moved those ourselves to help save time. We took 20,000 steps that day! Our storage unit was packed to the brim… we almost couldn’t shut the door. 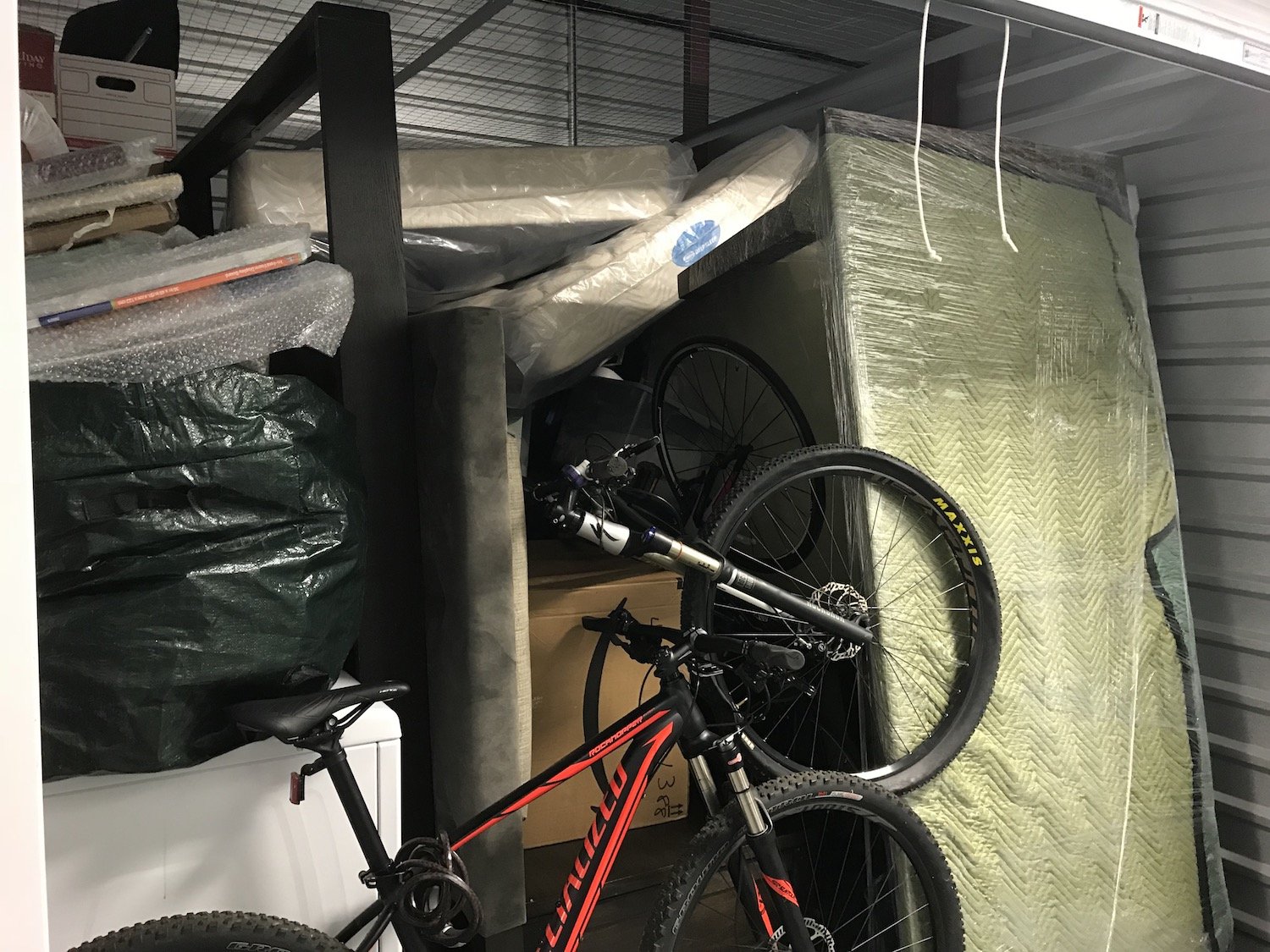 I felt kind of lazy hiring movers but in hindsight it would have taken us forever to move everything ourselves just because of the layout of our apartment complex. I hope I never have to move to another apartment again, but if I do then I will check where the apartment is located in reference to the loading area! It probably would have take us 1-2 less hours if we had been closer to the elevator.

In addition to moving, we are still working on our new house! We left week 6 by receiving our first draft of house plans from our architect. We are really enjoying working with him and we feel like he really understands what’s important to us. 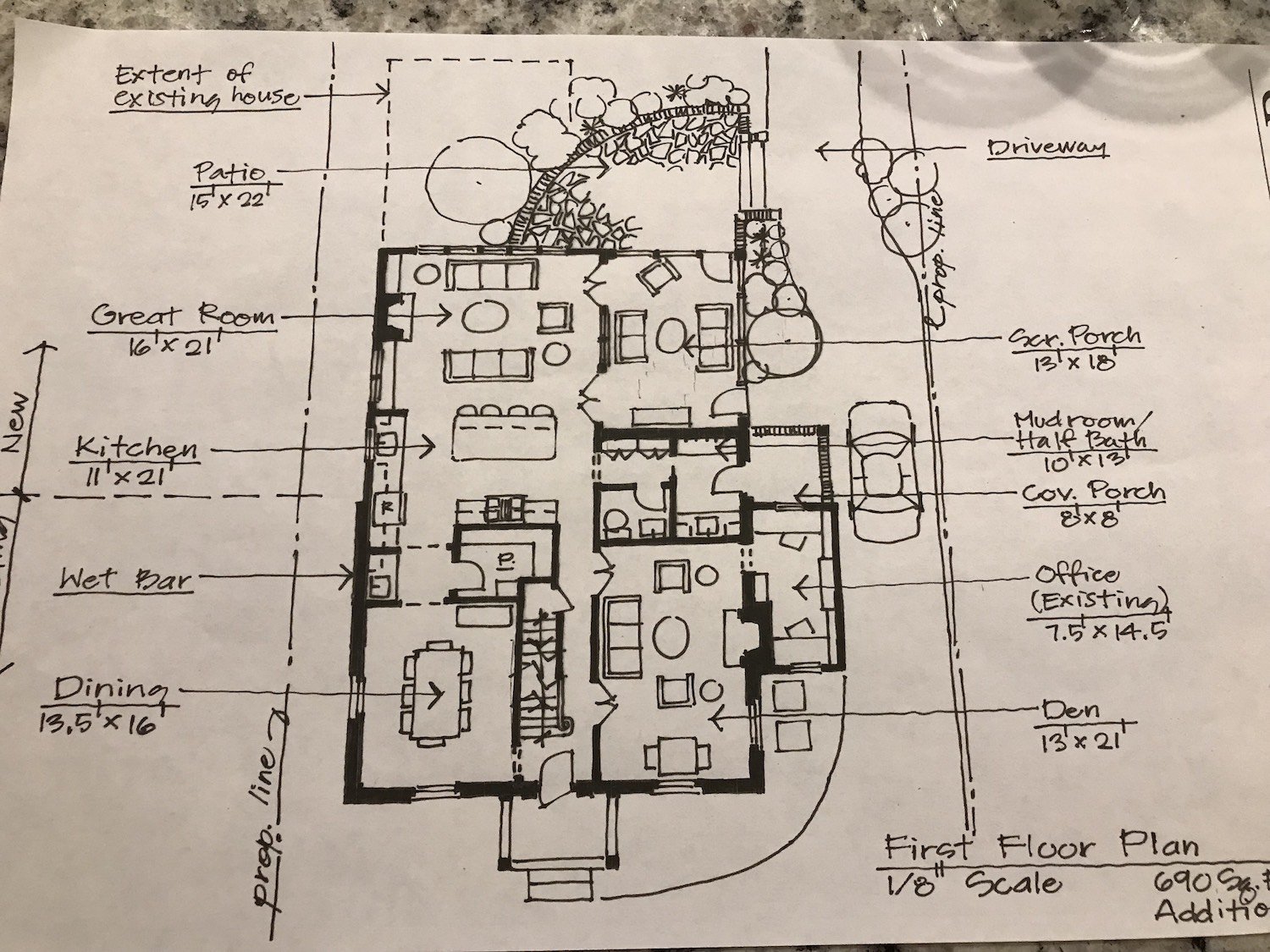 The good news is that we thought the plans were really great and included every last thing we asked for. The bad news is our contractor looked at them and they ended up blowing through our budget :) We went over because we added on the total square footage we wanted and also redid A LOT of the original house. Our contractor walked us through each area of the new plans to see where we were spending the most. Basically we cannot add on all of the square footage we want and still redo the entire inside of the house. We either have to pick one or the other, or scale back on both just a tad. It was really helpful to have an open discussion about pricing and our architect seems to be on the same page with everything.

Doing a renovation like this is so complicated when it comes to planning out a budget, just because there are a lot of moving pieces. Things vary so much just based on what exactly we are updating in the house.  But we made it a priority to sit down and regroup with what we wanted so that we could continue to keep the process moving along.

We still have fleas but they are getting better. The exterminator came and treated again (4th professional treatment if you’re keeping count). We also removed the stripping under the cat pee carpet because we realized there were a ton of flea eggs around the edges. Is it bad that I realize how disgusting this is yet I’m also not even phased at this point? 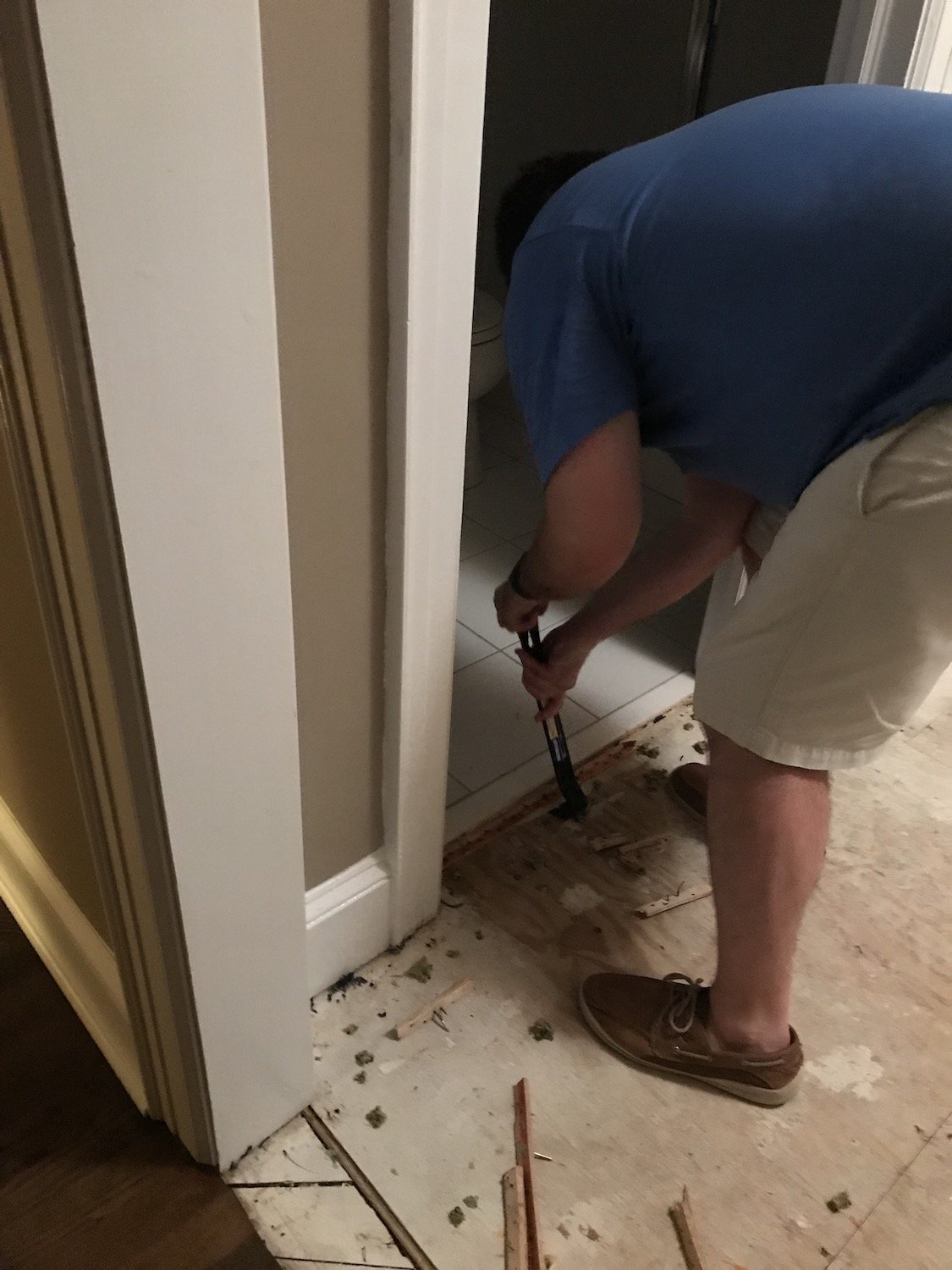 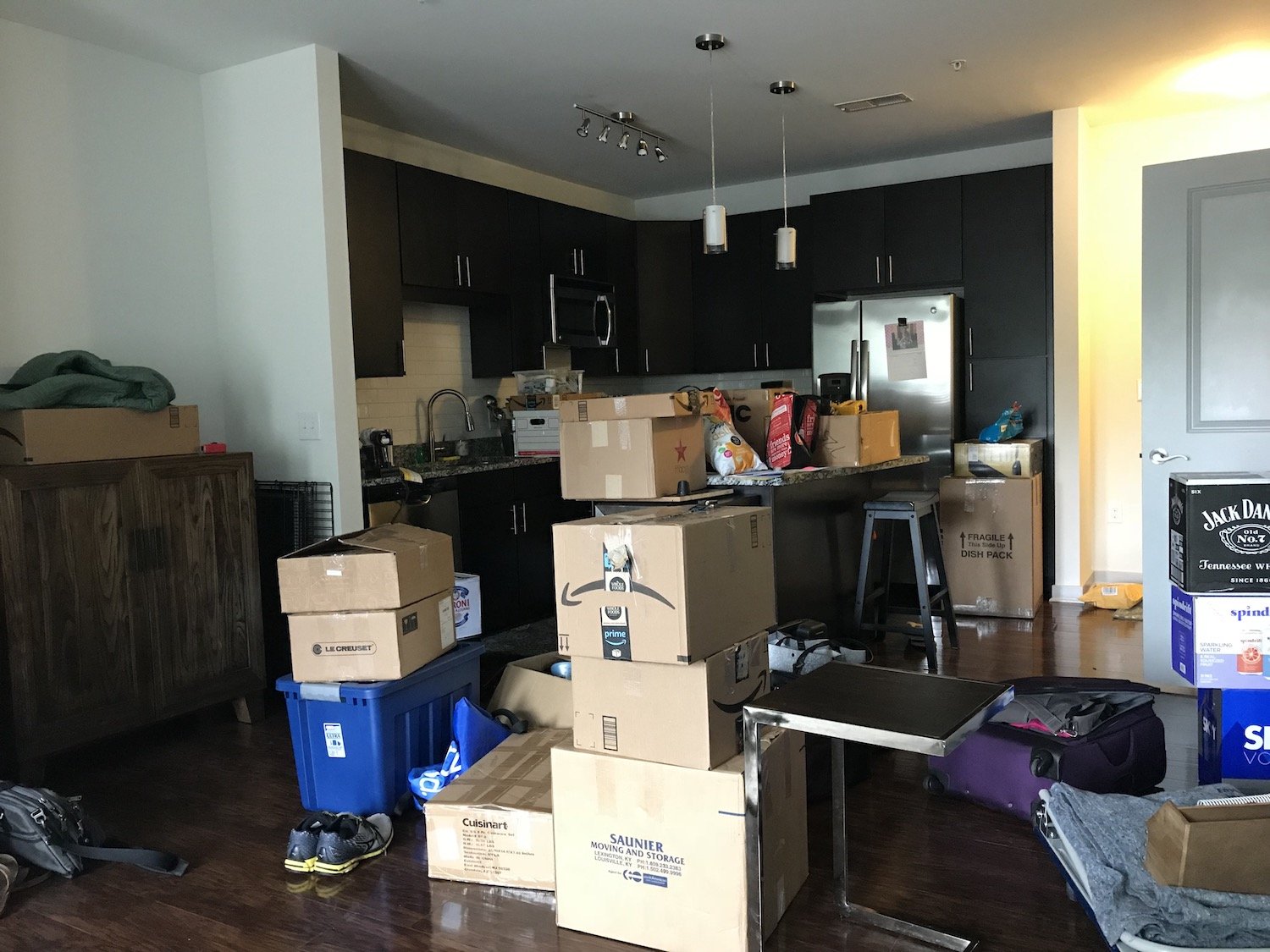 #2- It’s crazy to think we’ve owned the house for almost 2 months and nothing has happened yet with the renovation. I keep telling people that the whole process takes a year and they seem surprised, but this is why! So many little steps along the way before construction ever starts.

Something exciting is that the basement is getting cleaned out this week. This will really help us evaluate the cat smell! We are also supposed to get new plans back from our architect and close on the house we’re selling. I will be glad when this week is over so that we no longer own 2 houses at once :)

Have a great week!