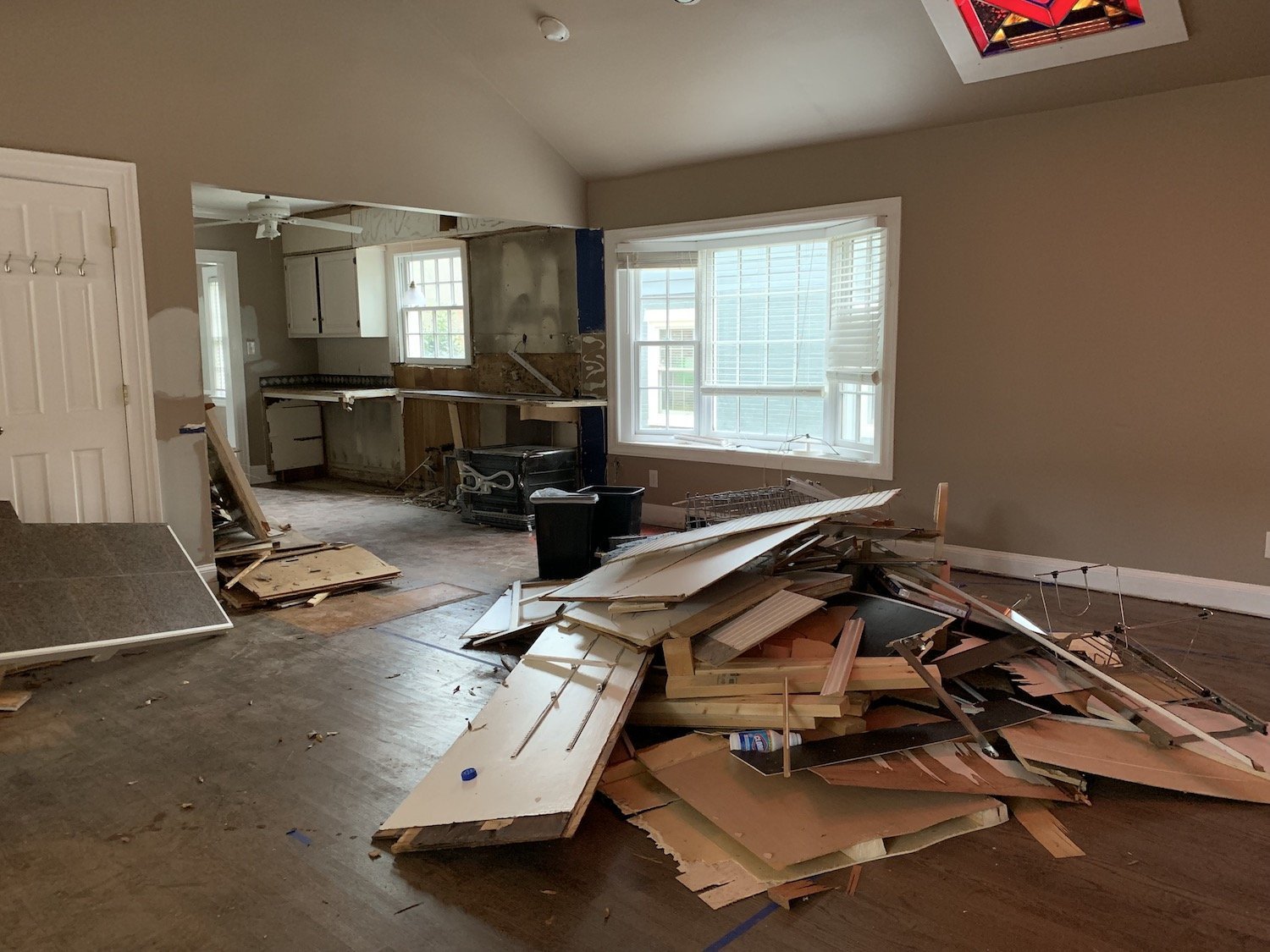 Hey guys! I’m long overdo for a renovation post at cat house. I know I should probably stop calling it cat house at some point… but today is not that day.

We didn’t want to waste time while we were waiting on our architect plans, so we decided make some decisions about the flooring, tackle the fleas and get started on demo.Here’s what’s been going on over there:

We spent a lot to weeks 12-13 trying to get to the bottom of the flea issue. After getting the house professionally treated for 3 months, it made no sense to us why we were still having an issue. 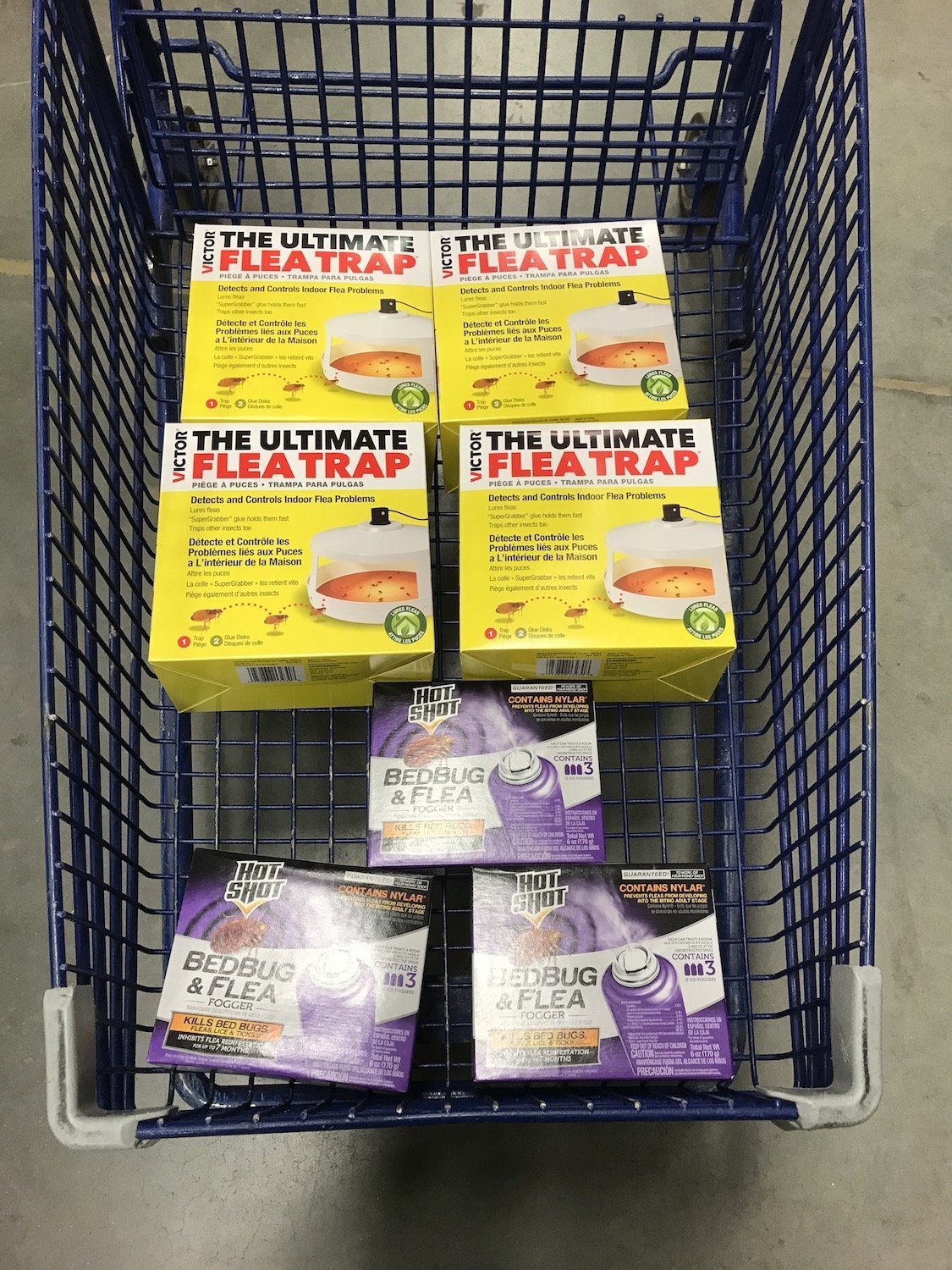 I decided to clean out the fireplace and I think we may have hit the jackpot. I found a dead bird in the fireplace and also sucked up some sort of live animal up in the vacuum (that later chewed out of the garbage bag once I put it outside). Fleas can continue to survive if they have a food source so this could have been the reason why we could never actually get rid of them. And I never thought I would consider finding a dead animal in my home to be “hitting the jackpot” but that’s what it felt like after all of these flea struggles.

Then we got a manager at the exterminator company involved and he walked through the house with us to give us some guidance. He said we were doing everything we should be doing and that there had to have been a dead animal somewhere for the fleas to continue to survive in a vacant house. He thought there may be more dead rodents in the ductwork (which is really common in older houses – they crawl into the vents and get stuck) and he was concerned about the crawl space as well.

We got the house professionally treated with flea insecticide again – I think this may have been the 6th time?

We have been debating what to do about the hardwood floors ever since we discovered the cat urine mess. As you may remember, we had ServPro come in and evaluate them this fall for cat urine, and we found excessive moisture in several areas all throughout the downstairs.

We hope this is our forever home and we were worried that we would refinish them and then still smell cat pee in the warm summer Carolina months. Having to replace them later on down the road after going through this whole renovation would truly be a nightmare. So we decided to just pull them up now. 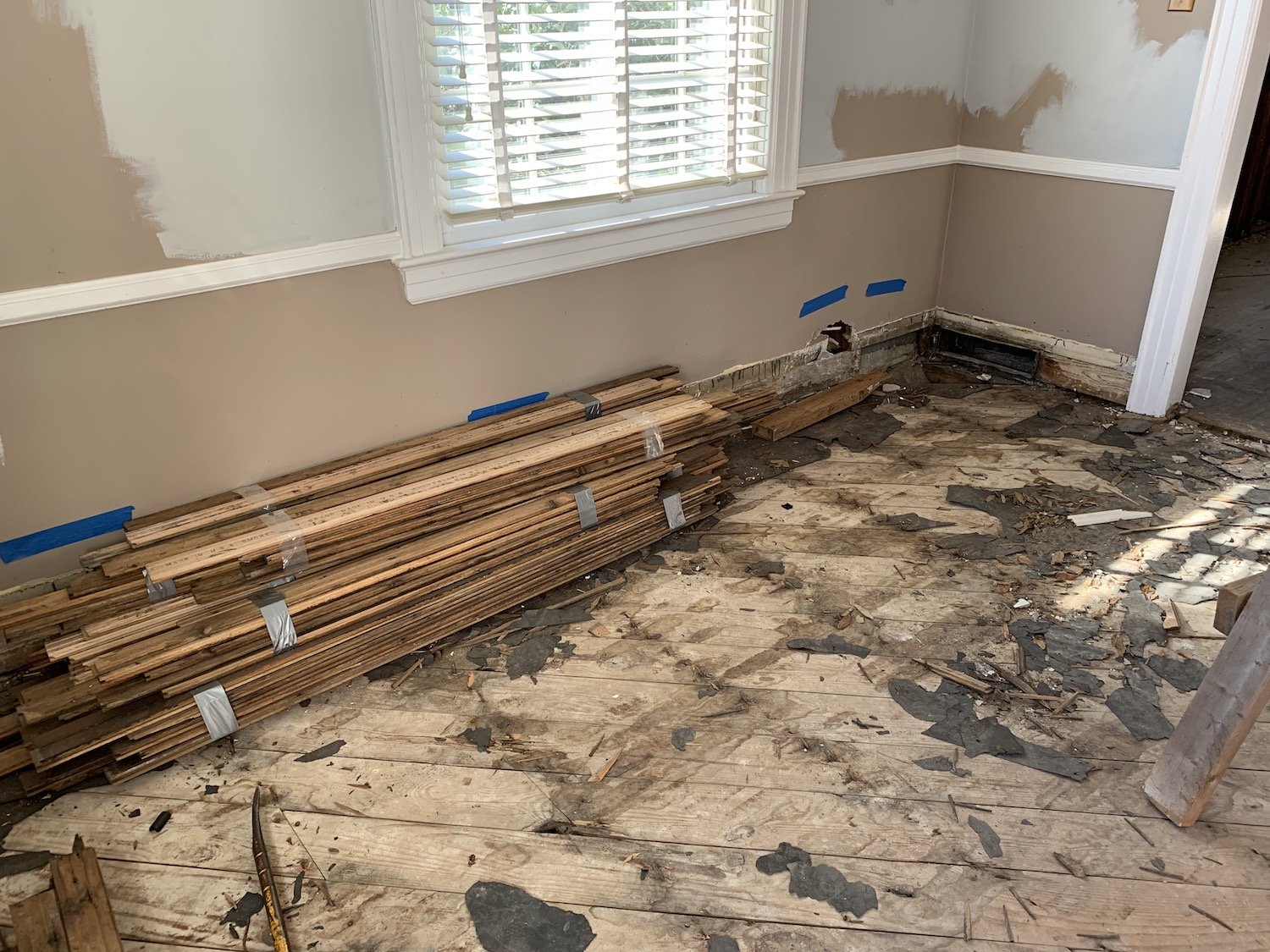 Once the floors were up, we found patches of areas where the sub flooring has been ruined/saturated with cat pee. I don’t think the smell would have gone away just from refinishing the floors, and now we can fix things properly. Replacing all of the sub flooring isn’t ideal because it affects the support of the house, so I think the plan is to fix the sub flooring in patches where we can see the pee is the worst. Then we can professionally seal the rest just to avoid taking any chances.

We went ahead and had the ductwork pulled out of the basement for 3 reasons: 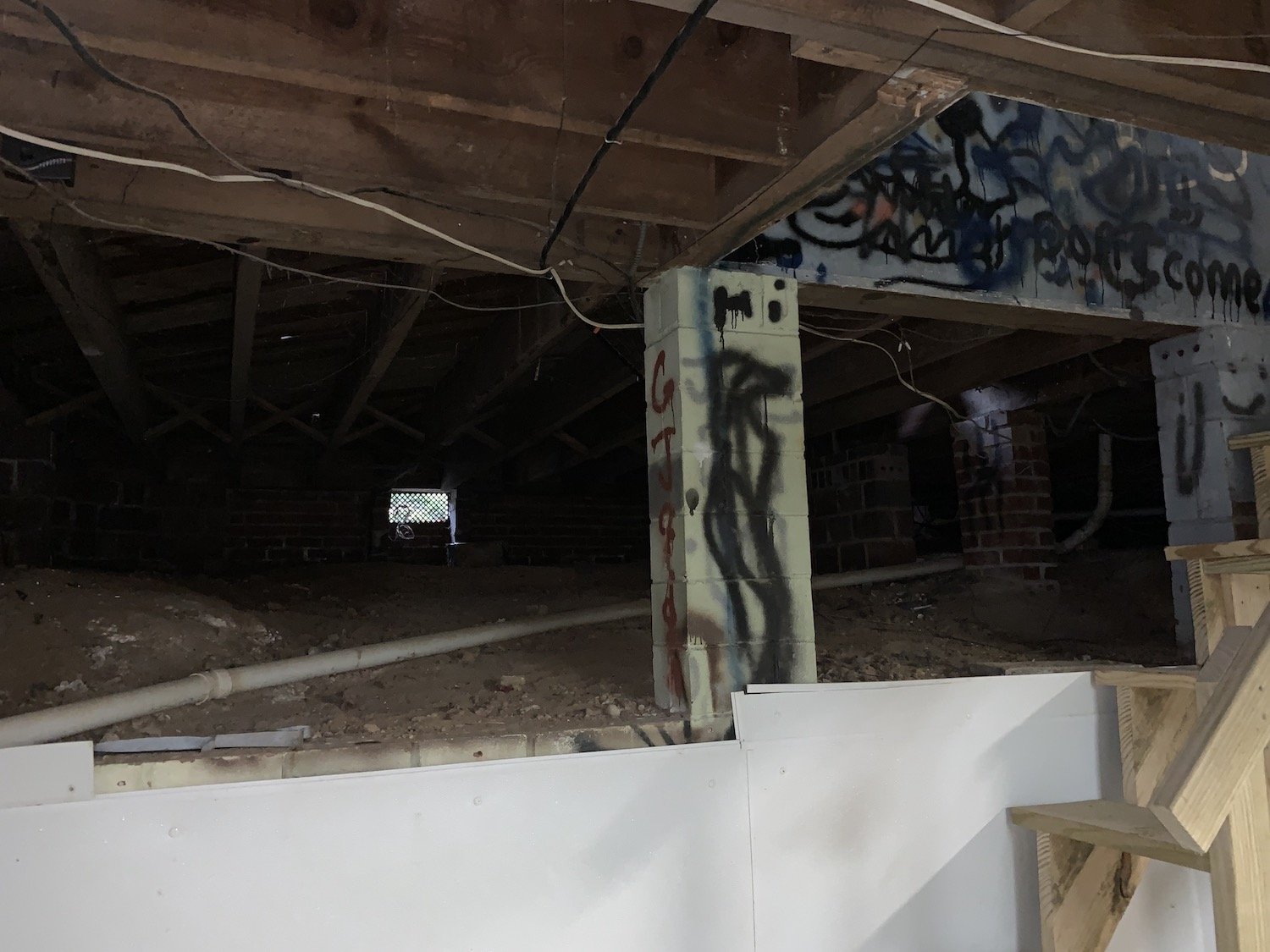 While the demo guys were already in the house for the ductwork, they also went ahead and tore out the old kitchen. We are using that space to extend the dining room and create a pantry / wet bar. We were able to donate the old fridge to someone in need so at least one good thing has come out of this house so far :) 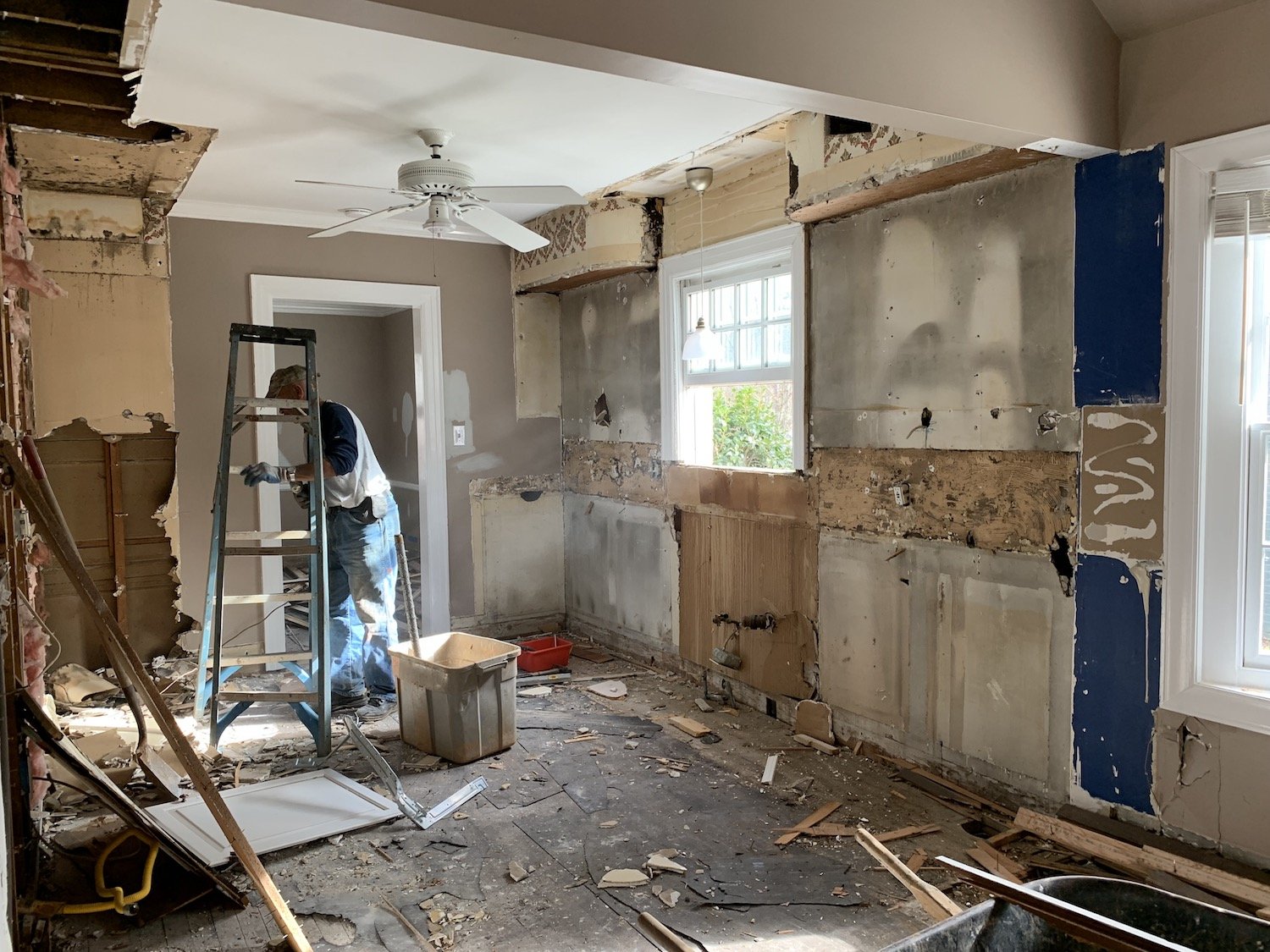 We received our construction drawings last week and sent them to our contractor to start getting pricing information. We are still waiting on our site plan and construction drawings of the garage. Once those are complete, they will need to be evaluated by structural engineers to determine if our plans will be structurally sound.

So we are looking at about 4 more weeks for that + 1 additional week for any other pricing information our contractor needs to gather. Unfortunately we will be losing 2 weeks because of Christmas and New Year. It looks like we will be starting the actual house at the beginning on February.